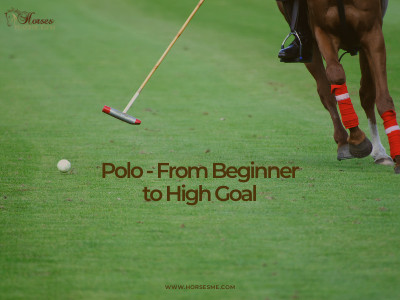 Polo – From Beginner to High Goal

Known as the sport of kings – polo has a rich heritage and is played all around the world. First played in Iran, it is one of the oldest equestrian sports. Originally played as a form of training for soldiers, teams could have anything up to 100 players on each side, the sport soon developed and was heralded as the national sport of Persia (Iran). It was then introduced to multiple countries including, China, Japan & India. The modern game played today, was evolved in India and from their enthusiasm for the sport it made its way to Argentina, Australia, England, Ireland & America.

A game played on horseback; teams consist of four players and go head to head with the aim of scoring goals using long wooden mallets and a ball. The games consist of 7.5 minute intervals called chukkas. Originally only thoroughbreds were used for the sport, however in more recent years the term polo pony is used to describe the variety of breeds which now take part. Ranging from 15hh – 16hh polo ponies are chosen and bred for speed, stamina & agility.

Did you know that Horses Middle East is partnered with The HUSK which provide a collection tailored towards polo.

The equipment used for polo has certainly modernised over time – players are required to wear a helmet, knee guards and boots, as well as ride in a specialised saddle and carry a mallet.

This is used to determine what level of polo is being played depending on the handicap of the players in the team.

As an equestrian wanting to take up the sport of polo the first port of call would be to research clubs in your area and sign up for lessons. Clubs that offer beginner lessons in UAE include the following:

Players who have progressed to this level will experience the game at a much faster pace with the requirement for well established skills of the game.

This is the highest level of polo – players of this standard compete internationally regularly against only the best players around the world!

Polo in the Middle East is a popular sport with regular fixtures and tournaments taking place across the region. If you are a polo enthusiast starting out in the sport and wanting to make your way to the top, you mustn’t be overwhelmed by the levels there are to make it. Remember, top players such as Shaikha Maitha Bint Mohammad or Rashid Al Habtoor  also started out as a beginner once!

Top
SIGN UP AND SELL FOR FREE!Sign up and get 100% off your first advertising package. Use code WELCOMETOHORSESME at checkout from Packages page.
SIGN ME UP NOW!

To post in this category you need to purchase a package.
Find the best one for you at this page: